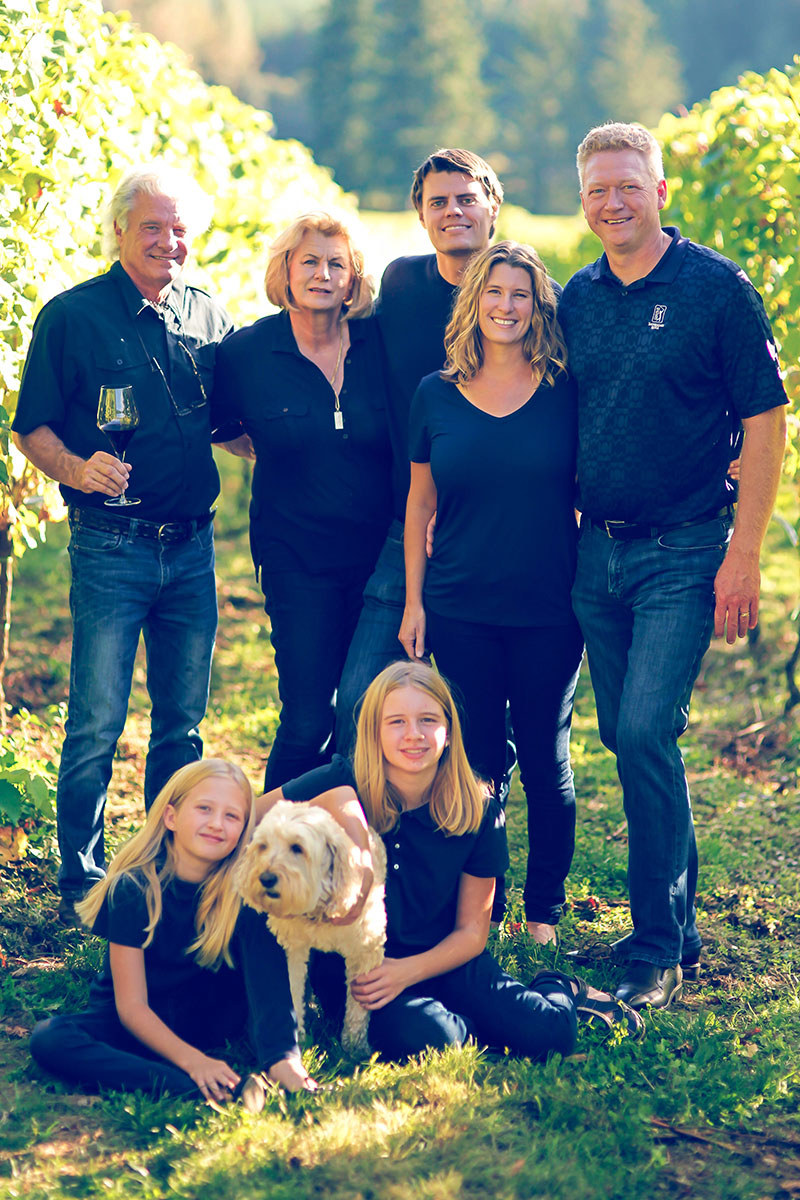 At Bayernmoor, "family" isn't a word we loosely throw around. The foundation of the winery is made up of the Harris and Biesecker families. Dr. James Beisecker and his wife Kate purchased the land in 1988 with the long-term vision of creating an old world estate and winery as well as an idyllic environment for themselves and future generations of the family. Dr. B brings years of business development and insight to the winery as well as the pride of having his endeavors passed on to his children. In 2001, their daughter Kim married Larry Harris. While both were working in San Francisco as attorneys, Kim and Larry fell in love with the wines of Napa and Sonoma and the seed for Bayernmoor was planted. The seed was fostered by Dr. B and Kate's love of old world wines and the desire to create top tier wines that rival the best wines from around the world. Much like the vines in our estate vineyard, our goal at Bayernmoor is to set down deep roots and thrive for generations to come.

When we began conceptualizing Bayernmoor, we knew we wanted to focus on European-style wines that really showcase the beautiful fruit that we grow in Washington state. As our vineyard matured and we moved toward growing our portfolio beyond Pinot Noir, we began discussing which winemaker could best bring our vision to life. One person kept coming up in our discussions who seemed like a perfect fit for our winery – Brian Carter. Brian is widely known for his European approach to winemaking and blending. Before the late 90s, when he created the award-winning winery that bears his name, Brian helped establish a number of Washington wineries that are now household names including Hedges, Silver Lake, McCrea, and others. Although you would think that single varietal wines rob Brian of one of his passions, blending, that is far from the truth. The final cuvée for each of our wines is blended from different styles of barrels and different lots of the vineyard to create wine that best represents our vision. From harvest to bottling, Brian’s minimally invasive approach is key to our philosophy that our wines represent the truest expression of the grape and the terroir of their vineyards.

Brian's influence is seen throughout the wine world. He is a pioneer in Washington wine, arriving here in the early 80s before the state even had a recognized grape growing region. He has twice been named "Winemaker Of The Year" by Washington Magazine and is the only three-time recipient of the Pacific Northwest Enological Society's Grand Prize. Brian is a long standing member and past chair of the Wine Research Advisory Committee and also acts as chair for the Wine Advisory Committee, which directs spending of state funds towards grape and wine research. Brian continues to influence the future of Washington wine and we are honored to be a part of that future.

After working in the world of finance for over a decade, Jeremiah decided to make one of his passions his career. He attended the Northwest Wine Academy and has pursued higher education programs through the Court of Master Sommeliers and has his WSET Advanced Level certification. Jeremiah started his career at DeLille Cellars and went on to focus on the Puget Sound AVA, working his way up to management at several wineries. He enjoys educating all levels of wine enthusiasts and takes pride in making complex ideas understandable to anyone. Feel free to contact Jeremiah with any wine questions. He also has a passion for music and plays multiple instruments, as well as hosting a weekly radio show. While he enjoys wines from around the world, he is also partial to local beer and craft cocktails.